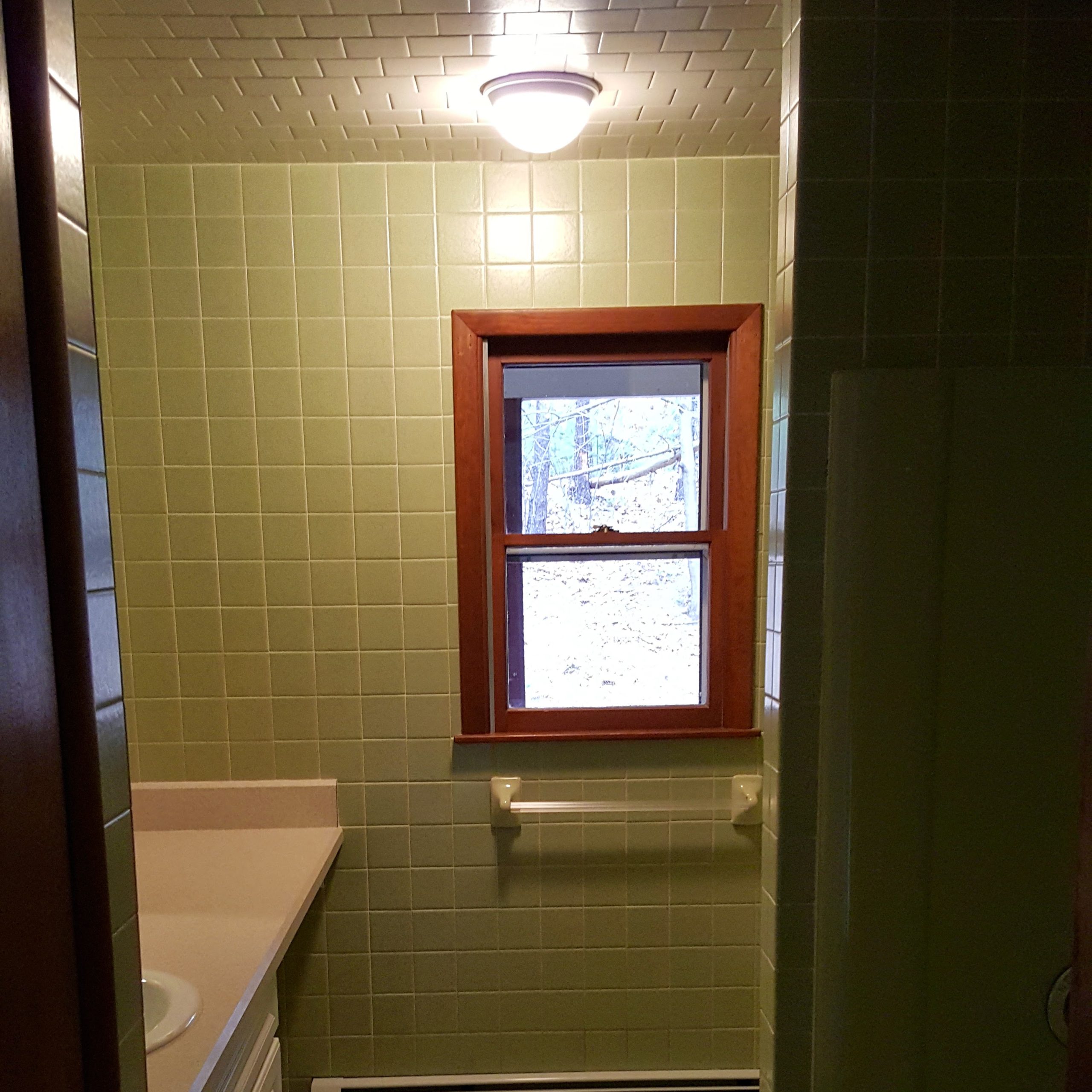 I do, but this was a bit much. Welcome to my Avocado Bathroom. Sister to the Harvest Gold bathroom. This main bath remodel wasn’t our physically largest project, but was the most anticipated and *cringe* most expensive one to date. There is a reason why they say bathrooms and kitchens sell houses – and our main bathroom felt like a spa when we were done!

This glorious almost original bathroom featured floor, wall, and ceiling tiles. They were identical to the 4″ tiles downstairs…but in more abundance. We were also aware of the fact that the ceiling was being pulled away from the joists in the attic. We made this fun discovery while up int he attic one day. The weight of those tiles over the course of 40+ years was literally going to collapse into the bathroom. This job was not only a “want to do” it was a “must do” job.

The Plan for our Main Bath Remodel

We lived with this galley-style bathroom for about 5 years before we finally could make changes. It’s our largest bathroom and the most used, as it’s on the main living floor. Changing the footprint wasn’t really an option, since our bedroom was on one side and the kitchen on the other. The challenge was how to make this long and narrow space into a more efficient and roomy space. There were some things on the list to go right from the get go:

Woof, this was a challenge to live with, especially after our daughter became big enough to stand at and use the sink. My husband didn’t think a Jack and Jill sink was particularly necessary (but he has since re-canted his statement!). I appreciated the long counter space to the right of the sink, but the rest of the counter didn’t make much sense. There were no drawers under the right side (possibly because of the baseboard heater likely would have overlapped) and the mirror was clearly not original to the bathroom, because it didn’t take up the whole space. You could also see where the original mirror was installed.

I did like the size of this shower-tub. The walls were a bit curved to give the illusion of space. But that’s all that was going for this shower-tub. There was barely any shelving or storage to hold soaps, shampoos, etc. I couldn’t even hang an under shower caddy because of how the tub came out from the wall. A caddy just wouldn’t stay hanging. Plus it was avocado and very much so an original to the house. Amazingly, the toilet had been updated right before we moved in, so that was not avocado.

In addition to feeling “squishy” in parts, the itty bitty mosaic tiles were starting to pop up off the floor. We had to glue quite a few down over the first 5 years int he house. Honestly, we were terrified of what we would find under the tile.

As per usual, we took care of the demolition ourselves. While this particular home reno job needed the skilled hands of a professional, we aimed to save money where we could. That meant doing demolition and painting on our own. The wall tiles were a bear to bring down. I had to channel all of my stress into swinging my hammer to break into the wall. The mosaic tiles came up incredibly easy in some places and were also a challenge in other areas. The sub-floor was (miraculously) not in terrible shape. We never did figure out why the floor was squishy, but it probably had something to do with the tile.

The ceiling tile. Oh that ceiling tile. We made sure to put on hard hats for this part. As soon as my husband took down the single over-head light fixture, the ceiling visibly sagged. He swung the hammer twice and the whole thing came down like a cartoon. The tub also came into the house during the build phase, so the only way to get it out was with our trusty reciprocating saw in pieces. The whole demolition took about 3 days to take down and clean up.

Announcements:
Welcome! Our page is undergoing a much-needed spruce up. If you can't find what you are looking for, please get in touch: alliecatquiltsandcrafts@gmail.com