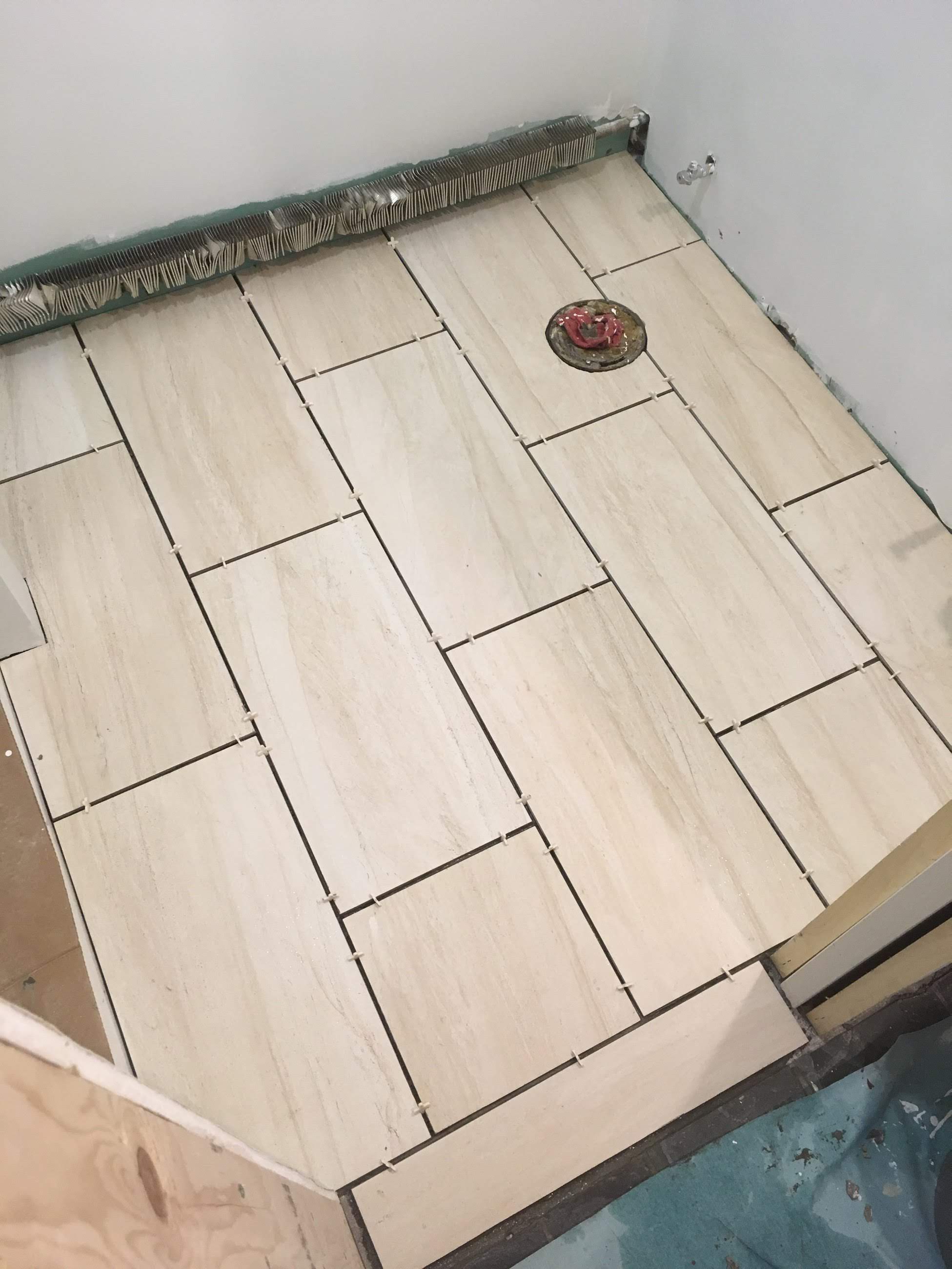 We were very lucky to find a house with 2 full baths in our price range back in 2015. That being said, we knew that both bathrooms would need to be gutted. Like every mid-century modern home, ours came with colorful bathrooms. At least the toilets weren’t colored. That saved some money! Let’s get started with this bathroom remodel.

We decided to start with the downstairs bathroom for a couple of reasons. First, it’s smaller, so it would be a faster and less expensive job (which, yes, that was accurate – at least the price tag). Secondly, we knew that when we were ready to do the main bathroom, we’d be forced to use the one downstairs for as long as the upstairs job took. So we might as well make it as comfortable an inconvenience as possible!

Just like with all of our home improvement projects, we did the demo ourselves. We may have budgeted for 1 big house project per year, but it doesn’t mean we don’t try to save were we can. A good carpenter or contractor can be expensive, and if we can avoid having them do the jobs we are fully capable of doing, we take advantage of that.

As if it were a future prediction, this was an adventure in bringing a tiled wall down. This room, however, had a drop ceiling, so we didn’t have to contend with tiles on the ceiling (like upstairs!). This bizarre drop ceiling (not normal tiles, but definitely rigged up by the owner) also made the ceiling very low. The bathroom was also dark and the very dark hallway just outside of the bathroom had an “office” drop ceiling.

This was our first remodel that would set the color scheme for the whole downstairs. While we did the big utility room ourselves, we painted it white and like to consider it our “basement”; thus making it a bit separate in my mind, to the rest of the downstairs. Let’s go gray!

I don’t mind painting, but I hate painting around things, so once the drywall was up, I did my painting. Behr came in clutch again with seagull gray and pencil sketch. I did have a spell of bad luck when I had to buy more seagull and the paint mixing person actually messed up the order – all of a sudden I had painted with a different shade of gray. I thought the painting would never end.

We also opted for a standing shower instead of the shower/tub combo. This allowed us to create some shelving or storage in this room.

Since it was a tight squeeze, we also opted for a pocket door. It’s about as small as you can get, but it made such a huge difference in that room. It was probably my favorite feature.

That’s the last thing you want when it comes to remodeling a home. But we’ve had one with every single project. After a very successful and basically stress-free bathroom remodel, we discovered some pretty serious mold when we took down the drywall in the utility closet. The drywall came down when work on the shower connections took place.We knew there had been some kind of flooding from a burst pipe a long time ago, and we’ve seen some evidence when we took down the drywall in the laundry room and a little bit of the bathroom. But this was something else.

We ended up taking down drywall all down the hall and then into the den. The den was NOT our planned next project. But we discovered mold four feet up the wall. We properly treated the wall sections and had them taken down.

Announcements:
Welcome! Our page is undergoing a much-needed spruce up. If you can't find what you are looking for, please get in touch: alliecatquiltsandcrafts@gmail.com